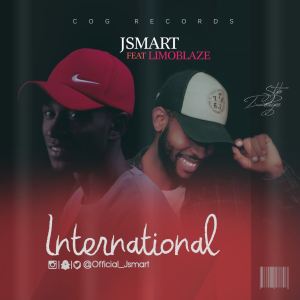 J Smart Breaks Out With “Ino TiDe” Featuring The Amazing Limitless “E Daniels” Last Year. That was not an Accident, But a Deliberate Course to Project God’s Light to the World. After the Release of “Ino TiDe” Last Year, which Gained Massive Attention and Airplays, Locally and Beyond, “J Smart” has Shown no Sign of Relenting, but went Ahead to Release the Visuals to The Song, The Visuals which was Released Couple of Weeks back, Which is presently Gaining Huge Attention and Presence on Charts, is Yielding Testimonies and turning on Lights in so Many Lives.

Showing no Sign of Relenting “J Smart” has decided not to keep his fans and the Ministry on a Stand Still, with the Help of an Amazing and prolific Rapper “Limoblaze” set to take the Gospel and their Fans Who are Ready “International” .
Here is “International”, Featuring Limoblaze and Produced By Jerrywine.

Joshua Jude Zagni and his Twin, Born into the Family Of, Mr & Mrs. Joshua Samson on the 1st Of June, Born Gbagyi, Hails From Minna, Niger State, An Undergraduate Studying in Federal University of Technology Minna, Started Music Officially In 2013, he also has One Album to his Credit titled “All Knowing God” which Bagged Several Awards.