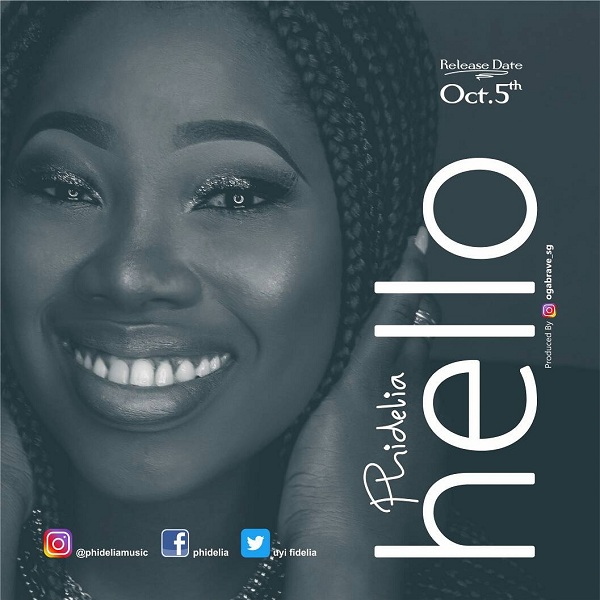 Phidelia is a Contemporary singer. She is out with her debut single titled ”Hello’‘ Prod. By Oga Brave. Despite all that is going on in the world today, this song is timely as the message is what the world needs right now.

This song is to remind you that No matter what storm you face, you need to know that God loves you. He has not abandoned you.

There will always be someone willing to hurt you, put you down, gossip about you, belittle your accomplishments and judge your soul. It is a fact that we all must face. However, if you realize that God is a best friend that stands beside you when others cast stones you will never be afraid, never feel worthless and never feel alone.

SING ALONG WITH “HELLO” LYRICS

Ogonna Fidelia (Nkem) Uyi also known as PHIDELIA is a singer/ songwriter who was born on the 5th Oct. She hails from Nnewi North local government area in Anambra state, Nigeria but spent most of her childhood days in Benin city, Edo state where she also had her primary (part), secondary and University education. She is a graduate of University of Benin with B.sc Microbiology. Phidelia has loved music from her childhood days but started singing actively in her teens, being part of different choirs. This eventually grew into her writing songs of her own and also singing them at some local events.

She was also part of the first and only “West African Idol” where she emerged top 10 in Calabar auditions with the likes of Timi Dakolo and Omawunmi, making her part of the top 60. Since then she has been writing music and working on her songs of which she released her debut single “HELLO” which is still topping music chart.

Phidelia is passionate about her music, which she calls “music for the soul”and hopes to inspire people through it. She is currently working on more songs to be released soon. She is married with children.