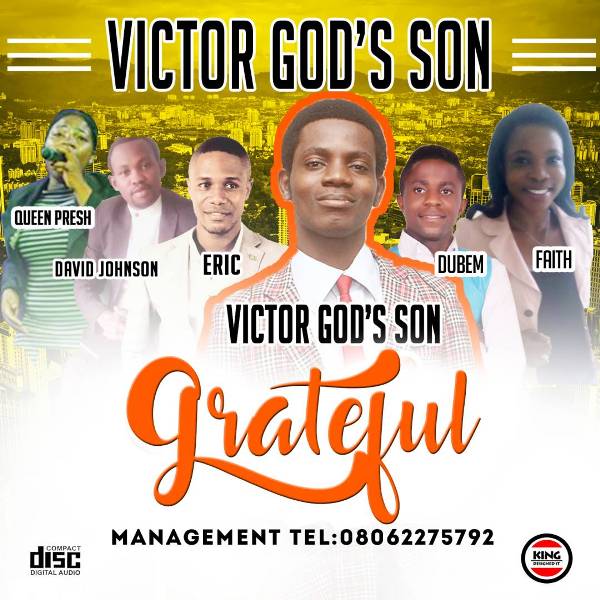 Victor God’s Son steps out in grand style with two new songs “Grateful” & “Chukwu Nedim”. Both songs are creatively delivered as inspired by the Holy Spirit. You’ll sure be bumping your head as you show gratitude to God your father through these songs.

Victor God’s Son did not deliver this masterpieces by himself as the song GRATEFUL featured sensational vocalists Queen Presh, David Johnson, Eric, Dubem and Faith while CHUKWU NEDIM which means “God My Father” featured Psalm Uche and Grace.

Victor God’s Son, third of four children from Delta State was born and bred in Port Harcourt, Rivers State of Nigeria, to the family of Mr. and Mrs. Sunday Ozuor. He started singing at a tender age and the singing gift began finding expression in 2004 at the Bible Missionary Church (BMC).

In 2005 he joined The Redeemed Christian Church of God (RCCG) where he became born again, joined the workforce and started manifesting His singing gift in the choir. Two years later, he was appointed the music director of his immediate worship center and has gone ahead to direct musical affairs from the Parish level to the Zonal level. To the glory of God his led choir has always come tops. Victor God’s Son has being in different choir and musical groups at different times among which are: Region 5 Mass Choir headed by Mummy Nkechi Williams Onovwiona, One Voice Musical Project headed by Terry Wilson, JCCF Choir in Nekede Imo State, Winners Campus Fellowship Abraka and Church Of God Mission Abraka e.t.c. He had also been a Music Director at RCCG, City of Liberty Church (Nekede Imo State), Dominion City Campus Fellowship (Nekeded) e.t.c.

He got admitted into the Redeemed Christian Bible College (RCBC) in 2013 following an obvious call into Pastoral ministry in 2010.

At present, Victor God’s Son has a gospel album to his credit. It was released on the second day of January, 2017; with the title “GRATEFUL” where he expressed his profound gratitude to God and admonished the world to do likewise in spite of whatever comes their way.