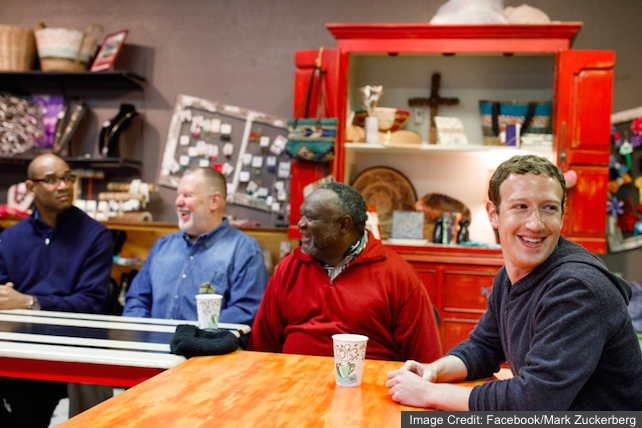 Mark Zuckerberg’s personal challenge for 2017 is to visit and meet people in every state in the U.S. A recent trip to Texas allowed Zuckerberg to better understand the work of some ministers in Waco.

Zuckerberg commented on the pastors’ intentions to help their congregations “find deeper meaning in a changing world.” While he met with a diverse group of people in Texas, he said the experience helped him “understand just how important community is” and that “we’re all just looking for something we can trust.”

Zuckerberg is the founder of Facebook and is increasingly becoming more involved in humanitarian efforts. In August, Zuckerberg and his wife, Priscilla, met Pope Francis and told him “how much we admire his message of mercy and tenderness.” The couple also expressed their admiration for how the Pope has found ways to “communicate with people of every faith around the world.” And while Zuckerberg, who was raised in a Jewish home, does not claim to adhere to any one religion, he stated on his Facebook page around Christmas that he is not an atheist, and believes “religion is very important.”

Speaking about his personal challenge to visit every state this year, Zuckerberg says he wants to “talk to more people about how they’re living, working and thinking about the future.” These are excellent questions to pose to Christians as we are constantly thinking of how we are living, how we are working toward securing more people into God’s Kingdom, and what that Kingdom is going to look like when it comes to fruition.