Nigerian gospel music star Ada Ehi has been rewarded by YouTube with the enviable gold plaque.

After being named one of YouTube’s artists of the decade in 2020 alongside Sinach, the Afrocentric gospel songstress has once again earned for herself a global honour as she surpasses one million subscribers on YouTube.

The overjoyed “Congratulation” singer expressed immense gratitude to ‘Jesus’ while emphasizing He makes great things happen for those who avail themselves to Him.

According to Ada Ehi, years ago, even though she wasn’t quite the most talented or gifted however, she gave up herself willingly to be used as an instrument and years after, she’s still basking in the Lord’s grace and reaping the benefits of her decision.

The mother of two, who shared the news with fans and followers via her Instagram page, wrote: “I remember a simple prayer I prayed some years ago when I realized that the Lord had started speaking to me and showing me visions and flashes of things to come, I knew quite well that i wasn’t the most talented, gifted or the most anything at all but I was willing if he could use what I had… no one else saw much in it anyways so He alone could use it.

SEE WHAT THE LORD HAS DONE! 🙇🏽‍♀️DEAREST JESUS!
I would always say, It is amazing how far the Lord can take anyone who is willing… let me add AND YIELDED! THANK YOU LORD, FOR THE ADDED RESPONSIBILITIES WITH THE GRACE 🙌🏽 I AM GRATEFUL JESUS 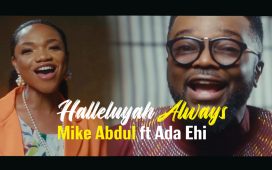