Chairman of Church of Pentecost, Opoku Onyinah will retire May 5 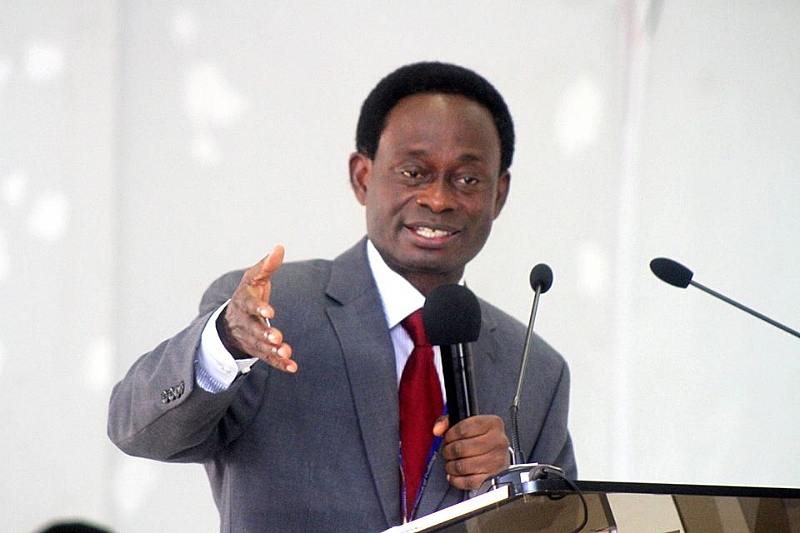 Chairman of Church of Pentecost, Opoku Onyinah will retire May 5

The chairman of the Church of Pentecost, Apostle Prof. Opoku Onyinah will retire from office on May 5.

A retirement service will be held at the Pentecost Convention Centre (PCC) on 26th August 2018 for him as he marks his 42nd year in the ministry.

The 64-year-old Professor is the fifth Chairman of the Church.

Apostle Prof. Opoku Onyinah, who served as the church’s maiden International Missions Director (IMD) from 1991 to 1996, succeeded Apostle Dr. Michael Ntumy, whose tenure of office as a chairman of the leading Pentecostal church in Ghana ended in 2008.

He is the last of the Apostles who walked with the founder of the church, Pastor James Mckeown. His 10-year tenure of office is said to have seen the greatest infrastructure and spiritual uplift of the church.

The Pentecost Convention Centre (PCC) at Gomoa Fetteh is one of his legacies for the church.

Opoku Onyinah increased the international presence of the church from 73 nations in 2008 to 96 in 2018.

His recorded sermons since 2008 stands at 8,888 across the world. In 2017, Opoku Onyinah recorded 722, his least in a year since he took office. The most traveled chairman, has written 162 songs; the most written by any chairman of the church. His song writing gift, is par excellence to past chairman; Pastor James Mckeown – 10, Apostle Fred Stephen Safo First African Chairman – 11, Prophet Martinson Kwadwo Yeboah – 34, Apostle Dr. Michael Kwabena Ntumy – 12, Apostle Prof. Opoku Onyinah – 162.

“He receives songs from God; sometimes when he is preparing his messages. His song satisfies every situation in life and encourages you push on in your Christian life,” Apostle Abraham Lincoln Angoh, the Bompata Area Head of the Church of Pentecost and the Chairman of the Music Committee of the Church said.

“Even if the person is not professionally trained, it takes a little time to train such a person than to have somebody who has been trained but is not talented/gifted.

“So, I think if young people are given the chance, they can work harder than older people. Older people can be good supervisors, but it is the youth who have the energies to do the hard work,” Opoku Onyinah said in an interview.

His gift of teaching makes his sermons stand out, “I make it a point to read the entire bible every year” he said. He has granted 111 interviews across all media platforms and received 19 international awards on behalf of the church.

His tenure wasn’t all rosy as it saw some controversial decision, some being the Scrapping the sex siting structure of the church and making the wearing of head gear not compulsory for females during church services.

He also introduced the Pentecost International Worship Center (PIWC) concept to the church. Many of the youth in the Church told Starr News’ Osei Owusu Amankwaah, these decisions helped to stop the mass exodus of them to other charismatic churches who had introduced flexible church service schedules.

It also made the church very attractive; making it the fastest growing church in Ghana.

He introduced the bible reading and prayer marathon; a period of continuous reading of the bible and prayers for a stretch of days.

The International Missions Director of the church, Apostle Emmanuel Gyesi Addo has said; “By virtue of divine grace, Apostle Professor Opoku Onyinah proved to be a pioneer, a pacesetter and trailblazer in many areas of The Church of Pentecost.”

“He was the pioneer IMD of the Church, the pacesetter in the introduction of the PIWC concept in the Church, the first Rector of the Pentecost University College, and the person under whose leadership the construction and operation of the world-class facility, the Pentecost Convention Centre, which had remained a dream and desire of leadership for a long time, was actualized, to name a but a few.”

He is President of the Ghana Pentecostal and Charismatic Council (GPCC) and was also the Chairman of Ghana Evangelism Committee.

“I have known Apostle Prof. Opoku Onyinah for many years. But I had the opportunity to serve the body of Christ closely with him when I was elected as the First Vice Chairman of the Ghana Pentecostal and Charismatic Council (GPCC), from 2011 to date”

“When I consider the life and ministry of Apostle Opoku Onyinah, my sentiments are summed up in these words of scripture: ‘And in every work that he began in the service of the house of God, in the law and in the commandment, to seek his God, he did it with all his heart. So he prospered.’ (2 Chronicles 31:21 NKJV),” Rt. Rev. Sam Korankye Ankrah, Apostle General, Royal House Chapel International said.

He survived three accidents during his tenure. He remains married with six children.