Christians Really Are Victims of Discrimination 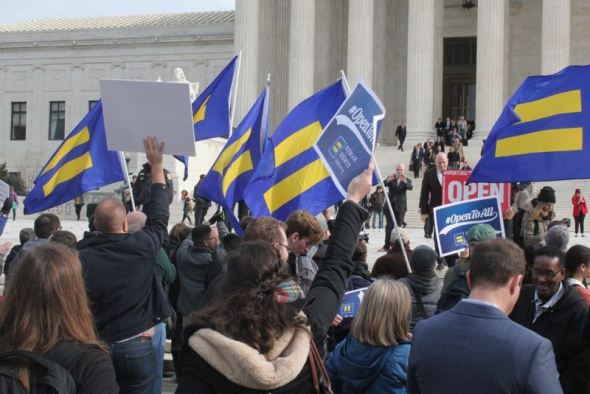 Can we stop accusing U.S. Christians of having a “persecution complex” for saying they’re being discriminated against, now that seven of nine Supreme Court justices agreed?

As I’ve described before, many on the Left even take the schizophrenic position of claiming U.S. Christians aren’t discriminated against while supporting policies of discrimination against Christians.

When the Supreme Court ruled Monday 7-2 in favor of a baker Jack Phillips, who refused to make a custom cake to celebrate a same-sex wedding, it did so because Colorado state officials were hostile to the baker’s faith — his Christian faith.

Writing the majority opinion, Justice Anthony Kennedy noted that, “The Civil Rights Commission’s treatment of his case has some elements of a clear and impermissible hostility toward the sincere religious beliefs that motivated his objection.”

One commissioner, Kennedy pointed out, called Phillips’ religious freedom claims “one of the most despicable pieces of rhetoric that people can use,” and compared him to Nazis and slave owners.

“To describe a man’s faith as ‘one of the most despicable pieces of rhetoric that people can use’ is to disparage his religion in at least two distinct ways: by describing it as despicable, and also by characterizing it as merely rhetorical — something insubstantial and even insincere,” Kennedy wrote.

The events described by Kennedy will come as no surprise to theologically-conservative Christians, who have long experienced the same sort of hostility.

Just recently, for instance, Philadelphia has banned Christian adoption agencies because they function according to their beliefs about marriage, and a Christian school teacher in Indiana was forced to resign due to his beliefs about gender.

Much of the liberal media treat such religious freedom claims as “despicable pieces of rhetoric,” hence the frequent use of scare quotes (“religious freedom”) and phrases like “license to discriminate,” to suggest that Christians don’t really want religious freedom for themselves, but just want to be mean and bigoted.

The opinion wasn’t a strong defense of religious freedom. We are left to wonder if Colorado could’ve infringed upon Phillips’ religious freedom if it had just been nicer about it. Yet, the decision is an important teaching moment for the country.

Those who identify as liberal and progressive talk a big game when it comes to tolerance and diversity, but in practice, not so much. The court’s supermajority opinion was, in effect, a plea for tolerance — genuine tolerance, not the “obey or you will be punished” attitude in the guise of tolerance that is so popular on the Left.

Maybe now that the court had spoken on the issue we can dispense with the accusation that Christians aren’t really discriminated against and instead have a conversation about what to do about it. Will we have a nation where diversity, tolerance and freedom of conscience are valued and respected?