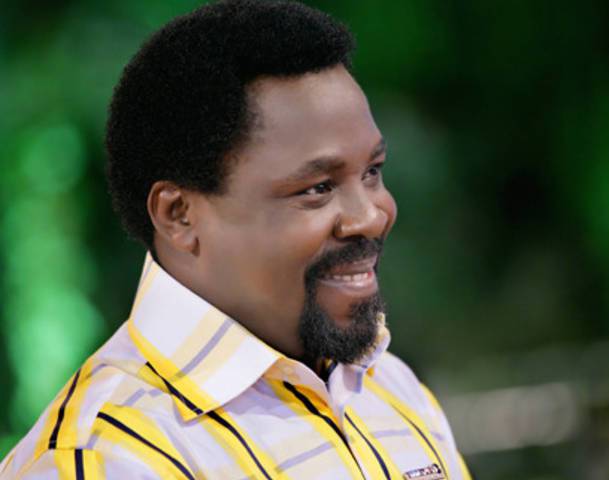 An interest group, The Ondo for Truth has urged the Founder of the Synagogue Church for All Nations (SCOAN), Prophet T.B Joshua to consider relocating the headquarters of his missionary from Lagos, the commercial capital of Nigeria to Ondo State, South West Nigeria.

Addressing some selected news men in Akure on Friday, the National Coordinator of Ondo for Truth, Mr. Festus Aladesanmi advised T.B. Joshua to shelve the Idea of relocating SCOAN to Israel as being widely reported.

The group said instead of relocating SCOAN to a foreign land that is playing host to millions of Christian pilgrimages every year, T.B Joshua should relocate to the Akoko Area of Ondo State.

The group promised to facilitate the release of at least 200 acres of land in Akoko on a platter of gold to T.B Joshua if he could consider the offer.

“We read in the national dailies that due to some reasons which we are yet to be told officially, that one of the golden sons of our state, Prophet T.B Joshua is considering relocating the headquarters of his Church from Lagos to Jerusalem in Israel.

“While we respect the man of God’s rights to liberty and dignity, we however want to advise him to shelve the idea of relocating to a foreign land. One that is already congested by Christian pilgrims from all over the world. In the light of the foregoing, we hereby plead with him to relocate from Lagos to Ondo State, particularly, the Akoko axis where he hails from.

“We want to say that we mean business. We have started talking to traditional rulers from the four local government areas in Akoko land to see if they can facilitate the release of at least 200 acres of land to T.B Joshua if he chose to relocate to Ondo State and they agree. In fact, they are all looking ahead for T.B Joshua to make the announcement of the relocation.

Responding to questions on the major reasons the group was calling on T.B Joshua to relocate SCOAN to Ondo; Aladesanmi said the dwindling economy of Ondo State needs the Synagogue Church Of All Nations than any other Nigerian state or foreign country at the moment.

“I say expressly that the unemployed youths of Ondo State needs SCOAN. Our Airport in Akure needs SCOAN. The market men and women need SCOAN. The hotel owners and other vital commercial enterprises in Ondo State need SCOAN. SCOAN’s presence is our metaphorical fish feeding the five thousand; The over five thousand direct and indirect jobs the Church’s presence can generate in Ondo State.

Prophet Temitope Joshua, fondly called T.B. Joshua by the general public, reportedly told his congregation few weeks ago that he would be relocating the headquarters of his mission from Lagos, Nigeria to Jerusalem in Israel due to some lingering issues which he did not disclose.

The church headquarters is currently situated at Ikotun in Alimosho Local Government Area of Lagos State.

Aside providing jobs opportunity for the people, 80% of hotel owners in Ikotun, Egbeda and Idimu areas of Lagos rely solely on patronage from worshipers, mostly foreigners at T.B. Joshua’s church.

SCOAN, according to the Lagos State Chapter of the Association of Hotel Owners of Nigeria, is responsible for 60% of every foreign tourist that visits Nigeria and 65% of income accrued to Lagos State Government through tourism per annum.

These tourists do visit Nigeria seeking for spiritual/divine healing from T.B. Joshua.

The Prophet is known for healing people from all sorts of terminal diseases which the best medical centres across the globe could not treat.

Numerous people have also been delivered from spiritual bondage by T.B. Joshua thereby turning his church to a tourist centre.

In 2015, the church hotel situated within the church premises collapsed leading to the deaths of 200 people, most of whom were South Africans.