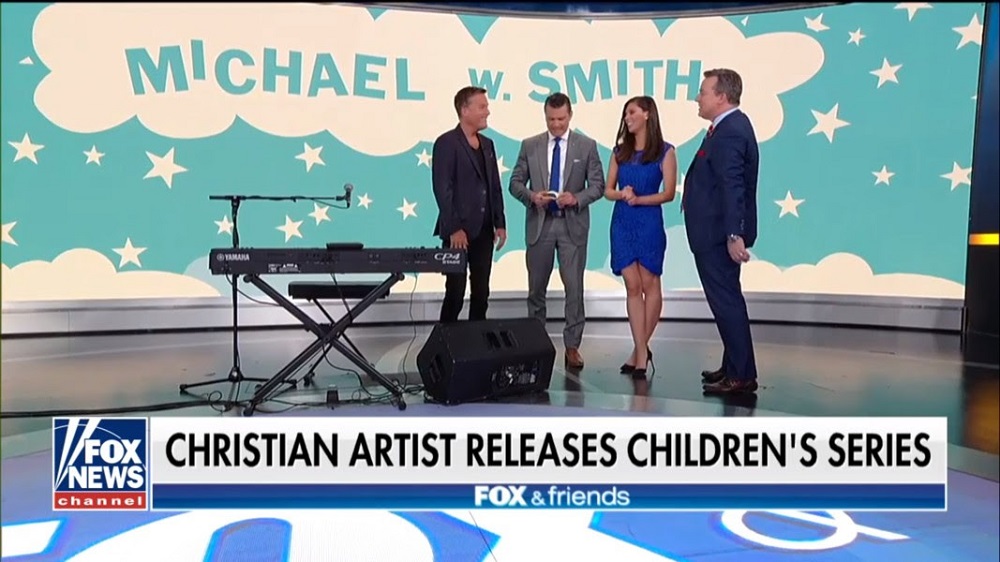 Celebrating the release on national television, Kathie Lee Gifford highlighted the new book and album on NBC TODAY’s “Favorite Things” segment during yesterday’s broadcast, sharing, “I love Michael W. Smith. He’s been a friend of mine for so so long. He has a brand-new book called, Nighty Night and Good Night, and beautiful new CD, Lullaby…” Gifford then handed the book and CD to co-host Hoda Kotb to give to her daughter, Haley Joy.

Smith also joined FOX & Friends hosts last Sunday to discuss the new projects. Following his interview in FOX’s New York studio, he further performed live the new ballad “No More Crying” and his widely-known hit song “Friends,” both featured on Lullaby. In an unscripted moment, co-host Pete Hegseth joined Michael to sing “Friends” during the “After the Show Show,” sharing, “I know this song…I’ve listened to this guy for years…he’s fantastic… Michael W. Smith, you’re an inspiration to a lot of us.”

Nurturing Steps is a new infant and toddler series with a simple mission to provide parents and grandparents with music and books to enliven a young child’s journey with hope and faith through song and storytelling.

“One of the greatest joys of my life is being a parent and a grandparent,” says Michael, the father of five, who is called “G-Daddy” by his 14 grandkids. “I want to serve the next generation well. That’s why I created Nurturing Steps, to provide stories and songs that will help shape the faith of our newest generation.”

For Lullaby, Michael not only includes the songs mentioned above, but also a meaningfully arranged version of his widely-known worship song “Agnus Dei” along with new ballads like “Sleep Tight.” He further leads an audio bedtime drama for young children with the Nighty Night characters, who join Michael as his band with Bear on Guitar, Lamby on Keys and Sleepy Puppy on Upright Base.

In Nighty Night and Good Night, members of the Nighty Night band are further called upon to help their friend, Ben, as he tries to fall asleep. After bedtime prayers and some going-to-sleep rituals are done, a lullaby sung by the band of animals including Bear, Sleepy Puppy and Lamby finally does the trick.

Smith, who is known as one of the most influential Christian music artists in the world, recently performed “A Million Lights” and “Surrounded (Fight My Battles)” from his 5-star-aclaimed albums A Million Lights and Surrounded respectively on ABC-TV’s Good Morning America. He has also recently been featured by USA Today, Billboard, TBN, FOX News, CBN, Parade, Yahoo! Music and many more outlets as these albums became his 30th and 31st Top 10 hits on Billboard’s Top Christian Albums chart, more than any other solo artist in history.

Taking the new music and fan favorites from his extensive repertoire on the road internationally, Michael continues his “Sounded By A Million Lights World Tour” this week while also embarking on a weeklong Alaska Cruise 2018 to launch July 21 from Vancouver, BC, Canada. To sign up for the cruise and for more details, go to www.inspirationcruises.com/mwsa.