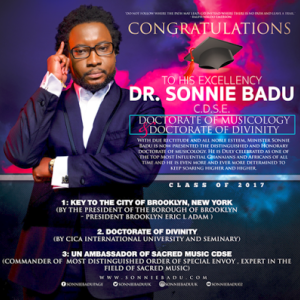 UK- based Ghanaian Gospel singer Sonnie Badu was brought to tears when he was bestowed with three top honours in the United States over the weekend. The laurels include the prestigious Key to the City of Brooklyn, presented by Eric L. Adams (head of the Borough of Brooklyn), a Doctor of Divinity degree by CICA International University and Seminary, as well as UN Ambassador CDSE (Commander of most Distinguished Order of Special Envoy expert in the field of sacred music).
Sonnie Badu, widely known for songs as “Covenant  Keeping God and Baba”, is currently touring the US with his latest project Colours of Africa. He was also instrument in the recent campaign geared toward garnering support for colleague Joe Mettle to win VGMA Artist of the Year.
This were his words;

“When God says it’s time to honor you , he does it in a grand style .. humbled to have received 3 major honors in New York.. never saw this coming” ..

> DR OF DIVINITY
> UN AMBASSADOR OF SACRED MUSIC
> KEYS TO THE CITY OF BROOKLYN NEW YORK
1: (Key to Brooklyn New York by the president of the borough of Brooklyn  Eric L Adams )
2:Dr of Divinity by CICA INTERNATIONAL UNIVERSITY AND SEMINARY HOUSTON TEXAS
3: UN AMBASSADOR CDSE (commander of  most Distinguished Order of special Envoy , expect in the field of sacred music )
“And so I decree and declare month of May as a month of great honor.. God will set a table before you in the presence of your enemies” .. 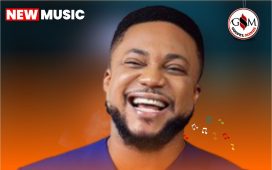 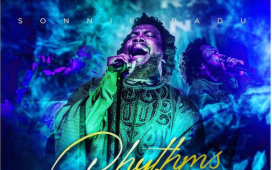