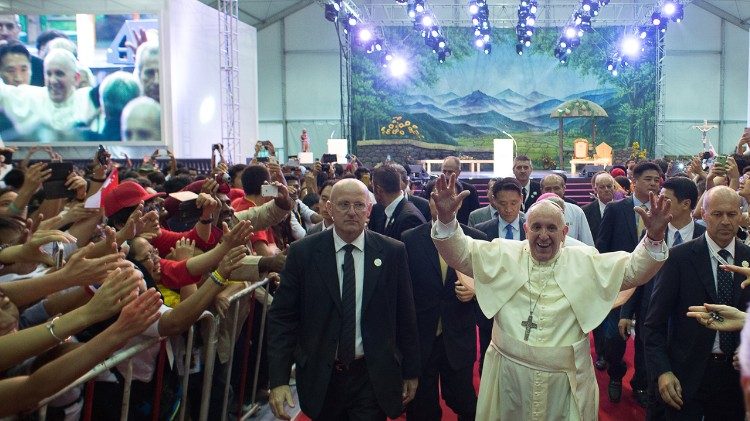 Pope Francis on Saturday held out the figure of Korea’s first Catholic priest, St. Andrew Kim Taegon, to Korean Catholics as an exemplary witness of heroic faith and a tireless apostle of evangelization in difficult times, marked by persecution and suffering.

The Pope made the remark in a message to the Korean Catholics living Rome on the occasion of the bicentenary of the birth of St Andrew Kim.

The August 21 bicentenary celebration of Andrew Kim’s birth is part of the Jubilee year that the Catholic Church of Korea is observing from November 29, 2020, to November 27, 2021.

The theme of the jubilee – “Are you a Catholic faithful?” – was the question that Andrew Kim had been asked by his interrogators. His firm response, “Yes, I am a Catholic,” led him to his execution under the wave of persecution of Catholics by the Joseon dynasty.

Korean Archbishop Lazarus You Heung-sik, Prefect of the Vatican Congregation for the Clergy, celebrated Mass in St. Peter’s Basilica for Korean Catholics living in Rome.

In his message to them, Pope Francis said St. Andrew Kim, along with his martyr companions, “showed with joyful hope that good always prevails, because God’s love wins out over hatred”.

He said that today too, amid the many manifestations of evil which disfigure the beautiful face of man, created in the image and likeness of God, we need to rediscover the importance of the mission of every baptized person.

Each Christian, he said, is called to be an agent of peace and hope everywhere like the Good Samaritan, to bend over the wounds of all those who are in need of love, help or simply a brotherly glance.

Pope Francis made use of the occasion to thank Korea’s Catholics for their generosity in sending him a consignment of Covid-19 vaccines for the world’s poor and needy. He said their sensibility and attention for the weakest encourages them to put themselves at the service of others. This is a strong invitation for a greater commitment to the cause of the least of the world.

Referring to his encyclical Fratelli tutti, the Holy Father said that there is no end to the building of a country’s social peace.

Rather, peace-building is “an open-ended endeavour, a never-ending task that demands the commitment of everyone.”

He urged those working for reconciliation on the Korean Peninsula to continue with renewed commitment to be good peacemakers, encouraging them to engage in respectful and constructive dialogue for an ever brighter future.