Gospel Songs Mp3 > Featured > Why Is The Church Now A Business Center?

Why Is The Church Now A Business Center? 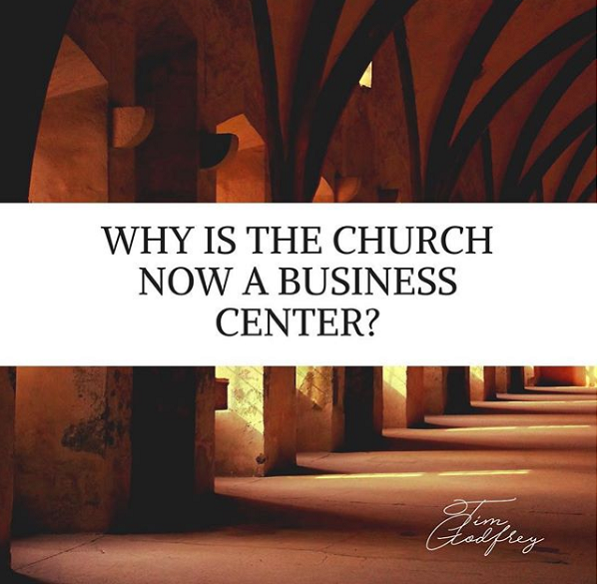 Why Is The Church Now A Business Center? a question asked by Tim Godfrey popular Lagos Nigeria base Gospel Music Singer, CEO of ROX Nation Record Label. Tim is the Convener of a music reality show tagged Sound Check, a platform he says will help to train young people with raw musical talents and give them a platform to showcase their gifts to the world.

“I have been meaning to ask … “didn’t Jesus preach against trades and transactions, buying and selling in the Church? Matt 21:12
Why is so rampant in our society?
What are your thoughts?
What can be done to stop it?” He Ask.

As You read The comments

@qmakcy01 Sir I barely see church, but instead we have a lot of denominations. And denomination sell to keep up appearance and buildings. To stop it, every person called or involved in ministry has to know what ministry is for. My opinion in short summary

@drstellz@i_am_ammerigo That’s my opinion as I earlier stated. Maybe I didn’t quite understand the angle the question is coming from but I answered based on the caption with respect to Jesus being against “trades and transactions”.

@drstellz@i_am_ammerigo My reply answers the question: “What are your thoughts”? As per the question :” What can be done to stop this”? I think applying wisdom to the processes carried out in Church would go a long way. Have a designated area for transactions if need be so there are no distractions. Or do away with any unnecessary transactions or trades.

drstellz@waobikThe church has always been that way, it doesn’t make the church less perfect. Even Jesus had a Judas on his team. There are still many churches that preach the truth, true there are fake ministers still.

@drstellz@hizzy_bass There’s nothing wrong with seeking after multitudes, even Jesus asked us to go into the world and preach to many. The problem us when we lose focus and begin to compromise just because we want the crowd. Seeking after crowd does not make one less righteous.

@drstellz@therealsmartmuzik Not all, I don’t think it’s wise to generalise. There are many honest ministers today.

@i_am_ammerigo@drstellz I quite understand your point but I’m saying the question is kinda twisted. See all these issues begin with how individuals go about their dealings. The church is not a building it’s a people. These issues sum up from individual shortcomings. The question is talking about how money is been requested at uncomfortable rates in some churches. Especially SEED that doesn’t have a scriptural backing. If individuals get it right, the stigma on the church will reduce.

@waobik@drstellz The church has not always been that way my dear. When you understudy the main rudiment of why the church was established and on who it was built, then u will know something is fundamentally wrong although its not surprising because prophecy has given us a hint of things expected especially in the last days.

@vibe_boss Because they are christian not a believer

@vibe_bossThey don’t understand the nature of the kingdom of God, a believer knows the way of the fATHER

@waobik A part of the problem is that we have men who are not called by God but seek to gratify themselves and fill their belle and enjoy fanciful things mounting platforms to declare the message of Jesus Christ according to their interpretation of whom they dont know neither has He(Jesus Christ) given them a specific message about Himself.So they function within the corridors of logic, motivation,entertainment and ENTREPRENEURSHIP in a place as scared as the gathering of the saints. If a man truly understands the depth of Christ and the purpose of the gospel he will act appropriately. So we have blind leaders leading a congregation that is tasty for the truth but unfortunately they cant give what they dont have.

@vibe_boss Jesus spoke about prayer, so if people are selling what is going to be our response, jesus gave us a pattern to follow because HE knows what is coming ahead. We should take charge

@vibe_boss We must live church matter and face the kingdom of God. Remember the church has fail, we must reposition it now…

@blessedgurlkel @timgodfreyworld if it’s not a business center .. how do u expect it to afford your price tag? I find dis very hypocritical. You are a gospel minister, last time I checked, the price it takes to invite you for a church program is just outrageously stupid. So pls, remove d piece of paper on your hair bfre helping someone to remove theirs. So Yes! It has to b a BUISNESS CENTER so it can AFFORD to bring you ON STAGE! Let your next post be “ Why do Gospel ministers Demand for millions before gracing your even” bye.

@rufaro1971 I think the issue stems from prosperity gospel preaching. It makes people feel they are inadequate if they don’t live a certain lifestyle. The Word.. salvation and eternal life should be the focus. Mathew 6 Vs 33 summarises it all for us.

@go_zie This is because most Christians really don’t know God… If they knew God they wouldn’t spend one more day under a wrong “church” . It’s creeping also into the music ministry where a music minister will charge 500k just to be a blessing to lives in 20mins. I understand music ministers have needs but the trend is becoming appalling Alot are selling their oil…hustling to get on the top just to make money and not because of hunger for souls…. It’s become as if we are competing with the world… If hunger for souls for the kingdom is out of it, it’s not God.if our Christianity is not revealed to us by God’s spirit just like Paul… We will only be scratching the surface for gold….. Hence the devil taking advantage of this and fueling the lust for riches in Christendom.

@chubiyojo @timgodfreyworld Sincerely, how do you feel about your CDs being sold in church? Or your concert tickets. Or if you eventually write a book? You’ll find the answer right there. ❤

@i_am_ammerigo @drstellz probably you should try and see many sides to controversial questions on social media. It’ll give a sure guide.

@king_strykar @timgodfreyworld the bible already said in the last days men shall be lovers of themselves than lovers of God and there would be a high rise of false teachers and doctrines not in the world but in the church so i feel it is just a fulfillment of scriptures in our days. Moreso, christianity is seen to be more liberal in its administration as against other religions so it is easier to accomodate those who tend to pollute it. My take though

@king_strykar @king_strykar @timgodfreyworld i feel the only way to stop it is to walk according to the scriptures that says each man should work out his salvation with fear and trembling. Once a man is inclined and in tune towards God, he will necessarily not be swayed by those who have turned christianity into commercial institutions because he already has the word in him. When Jesus said we should watch n pray, i guess he was also referring to instances as these

@wilsonglorytoglorywilsone Sir, for you to come and Minister to God’s people, how much do you charge? If you were invited to a small church first offering small amount and a bigger church invites u later with higher amount etc. Which do you attend to? That’s the answer to us all…. Both pastors, instrumentalists, othersssss,,,, me too 👶 👧

@freepraiseworship😁😁😁 funny enough we don’t understand the buying and selling part.. It was actually lawful to sell back then cos of remission of sin. Sheeps without blemish and all kinds of animal including birds. But then the son in laws of the priest are the ones selling and hiking the price of these animals leaving the poor hanging and even if you come with your own animals the son in laws won’t certify you and the priest won’t accept your sacrifice unless you buy their own quadruple priced animal. These were the things jesus saw at the corner to observe hence the statement “my house shall be called the house of prayer but you have made it the den of robbers” part of the reason why Jesus had to pay the ultimate sacrifice.

@ceterismedia Depends on the church you are talking about, church of God or church of men?

@gracedmarvin The church is not a building.go do a research on the history of the church and ur eyes will be open but y’all are lazy and illitrates of scripture and u lack knowlege of scripture truths in prophecy across the timeline of the Bible.jesus christ gave us report card of the gentile churches in revelation 2.yaall start from there

@gracedmarvin The church is not a building.go do a research on the history of the church and ur eyes will be open but y’all are lazy and illitrates of scripture and u lack knowlege of scripture truths in prophecy across the timeline of the Bible.jesus christ gave us report card of the gentile churches in revelation 2.yaall start from there

@gracedmarvin@drstellz anti semitism. very sure u don’t Know what that is.the biggest deception the devil has used to blind the body of christ. leave pastors and denominationalism and go back to ur Bibles and read,rightly dividing the word of truth that u may be established in the knowlege of christ.

@gracedmarvin If y all still see the church as a denominational outfit,Christ embassy,redeemed etc or whatever they call themselves,u have failed already.the early church prevailed and grew spiritually in the face of heavy persecution.the early church was not a building with a brand name.everything changed in the 4th century under emperor Constantine.mentally lazy people with dull heads and ears waiting for pastor.go and carry ur Bible and read it,map out the history of the church for the last 2000 yrs.and u will see the truth.i have found it in christ and no man can take it away from me.i am free

@mic_oai@otasky church isnt a place to glorify sin or make people weep because of sin…its a place where Jesus is revealed .. service to service…that the eyes of your understanding being enlightened, that you may know the hope of your calling…not how many sins ive committed

@mic_oai@mic_oai@timgodfreyworld ministry today has gone beyond the pulpit, it has to do with tv and radio broadcasting, salaries for church staff (full Time pastors, engineers, cleaners, instrumentalists), also church expenses, soo i am in support of the church selling tapes, magazines, etc..why not.. also i am in support of there being a cuisine of some sort in the church premises.. these things are needed but they shouldn’t take peoples attention away from the reason they came…i think it boils down to the individual

@co Tim…I really do love u and respect the energy with which u minister but sir, there are certain discussions that are way too high for u lead as public discussion because u have lots of infant Christins who are your followers and might not understand your argument and as such would be led astray. I believe u are close to lots of prominent ministers, u can make this a discussion at the top level…u can’t because of one bad egg conclude that all other eggs are bad… Despite the subject of your argument which some might find reason to criticise the church, I strongly believe that the church is blessing to countless people including you that thinks the church is a business centre…please let’s lead discussions that will encourage the unbeliever to become a believer rather bitting the finger which has fed you. God bless you

@oghale_o It signals the end time. . .it can’t be stopped 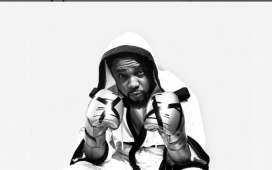 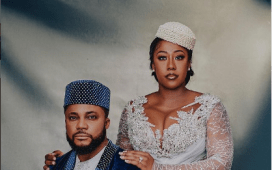 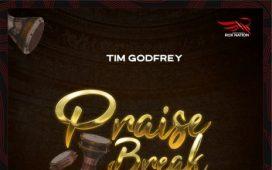