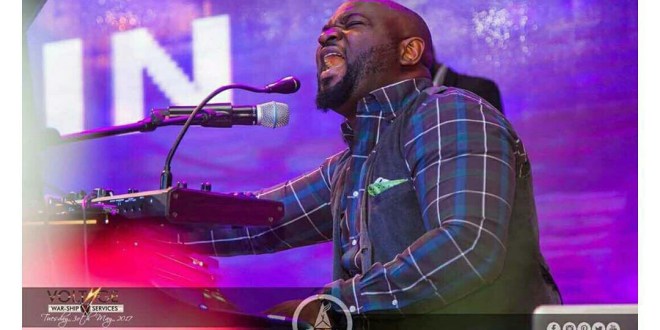 Finally ace music producer, song writer and hit maker Wilson Joel has done his first live performance as an artist in COZA (Common Wealth of Zion Assembly) Abuja. Who would have believed that a negative comment by an disgruntled Instagram user would bring such a favour and usher Wilson into exploring another side of his multifaceted ingenious personality. Some people don’t know that he wrote Onos’ Alagbara and other songs out there.

If you are on Instagram and follow Wilson Joel (@musicmagnate), you will know that he is a very active social media user. He does not hesitate to comment on what he likes and speak up about what he does not like. If you are doing a phenomenal thing and he gets wind of it and he likes it, he will comment. He is a lover of God and associates with the gospel and excellence every where he sees it. Perhaps that is what attracted him to Pastor Biodun of COZA (who isn’t, I mean the guy is not your regular pastor, totally un-boxed) even though he attends House on the Rock and has Pastor Paul Adefarasin as his pastor.

So on this faithful day, an Instagram user (who has since vanished from Instagram) attacks Mr Wilson for openly showing his admiration for Pastor Biodun of COZA, accusing him of seeking attention and favour. It became a serious issue that day as it initiated a heated argument on Instagram that day. To cut the long story short, Pastor Biodun out his machinery in motion and the next thing we see, Wilson Joel is on the bill for COZA’s Voltage War-ship programme among other A list artistes like Sammie Okposo, Mike Abdul, Ada Ehi, Onos , Tim Godfrey etc. The problem was we have never seen Wilson Joel perform as an artist, in fact people close to him know that he sings but won’t do that in public, on stage, not as a performing act.

But low and behold, the lion is unleashed, watching this video and watching his performance reminds us and encourages everybody who has got any bit of talent to stoke it. fan it till it burns. He totally handled it, killed it like we will normally say. Of course he did shared his testimony of how he was gifted a Range Rover Autobiography after he had a car accident. Yes there were a few hitches, but I wouldn’t dignify them as they are in consequential in this piece because this is purely a grace powered event.

We pray to see more of this talent displayed.  Congratulations to Wilson on this new level.