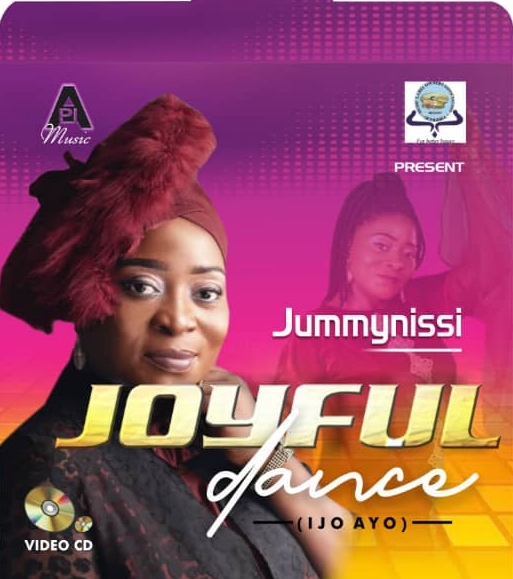 JummyNissi drops the video for the song “Joyful dance” (ijo ayo), which doubles as the title of her power-packed album which is a fusion of praise and confession, prophecy and declaration from the scriptural standpoint. It’s also a daily, sing-along song that can flood our soul with refreshing, with a heartfelt rendition, powered by great instrumentation and now beautifully complemented by a very colourful video.

Jummynissi is a gospel music minister, a chartered tax practitioner, and a professional Counsellor. she’s the President of HeartAlive Support Initiative a non-governmental Organisation that specializes in teachings on emotional wellness, She studied Rudiment and theory in music at Extramyle music School,

served in the capacity of choir co-ordinator as a youth. She has also featured in different concerts both as the Lead singer and as back up. She started her singing career in the children choir and led in their different outings also in the then star show children program organised by channel 7.

Jummynissi has an Album to her credit tiled ‘Joyful Dance’. Along with 2 singles. She is described as a prophetic praise and worship minister. As a way of giving back to her society, Jummynissi organises an annual program on defence skills in prevention of sexual abuse for children men and women alike, she also teaches parents on how to protect their wards.

Jummynissi is all poured out to God and uses her songs as a message of hope, encouragement and the healing stream flows. She’s married and blessed with lovely Kids..

Jummynissi is an ace singer who has endeared many to herself both within and outside the shores of Nigeria,

She has served in the Capacity of praise Worship Leader as a youth and at her local church.

Olajumoke whose debut “Mogbe o ga” – I praise you, dropped in March 2017 serves as a Deaconess and she is also armed with a PGD in Guidance and counselling from the prestigious University of Lagos, and has her masters in view.