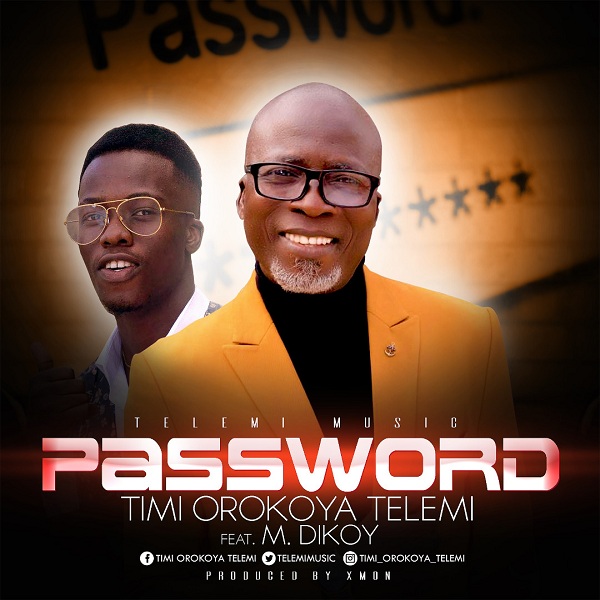 Password is a powerful song in an Afro pop beat that describes Jesus as the only one who gives everything that we have and He is the only name that is given to a man through which every knee bows and salvation is guaranteed.

Password is a new single by Telemi featuring M.Dikoy. The song was produced by Xmon.

In this song the life of Christ is described as the password that opens every door of our lives.

Telemi shares the inspiration behind the song:

“It happened some years back when i needed to obtain an information on my daughter’s laptop which has been pass worded (if grammar permits). I couldn’t achieve this until I put a call across to her in school and she sent her names in a particular as the needed code to assess the gadget. I inserted this digits and the system opened. .. OMG!

I sat down for a while to ponder over this scenario, I asked myself, and how can my daughter’s name become a code I couldn’t decode until she told me. I never knew God wanted to open my eyes to see beyond that level.  Just as I was thinking, I heard the Holy Spirit ministering to me saying, man, just like the name of your daughter became a secret code you need to open a gadget, that is how the name JESUS is the essential and the indispensable secret need of this world that many do not know except those He tells or His father in heaven reveals to.” – Telemi

Message to the parents from Timi Osukoya,

“Please don’t force your children into choosing a career in life but guide them towards what you see them manifesting at early stages in life.  I remember my father almost stopped my education because of my passion for music that led to the purchase of Fela Ransome Kuti’s album “IKOYI BLINDNESS” -#7 then when I was in form four. Today God has taken over the spirit to His own glory as you can see.”

Born on the 5th of January 1958 in Arigidi Ekiti now Ayegbaju Ekiti, to Chief & Jacob Osukoya of Imesi Ile in Osun State. They were sojourners called “The Osomaalo”. Rotimi attended Saint Louis Primary School Ado Ekiti. 1966 to 1972. He had his secondary education in Corpus Christi College, Ilawe Ekiti, 1973 to 1977.

A graphics artist but music took over his attention from practicing the vocation.

Rotimi Osukoya as he was then called in his school days started his music career as a member of the choir of Methodist Church,  Sogunle in Lagos in the year 1978, a year he arrived Lagos from Ado Ekiti where his biological parents resided. He became the leader of the junior choir of the church in 1983 through the inspiration of his 2nd father Chief Samuel Oladodu Osukoya, now late and later became the church Choir master in 1984.

Timi Osukoya Telemi as fondly called in the music industry and ministry now preferred to be called Timi Orokoya Telemi on spiritual ground, is a recipient of over 50 awards from various organizations in Nigeria and overseas. He has recorded 27 albums and 2 singles, including PASSWORD. He is one of the Godfathers and stakeholders of Nigerian Music industry. A band leader of Telemi Gospel Music, founder of Praise Generation Assembly and Oke Eri prayer mountain in Imesi Ile. A pastor and an evangelist with apostolic commission.

Telemi was the President of Gospel Musicians’ Association of Nigeria for 6years and presently the convener of All Nigerian Gospel Music Revival Conference – ANGOMREC. He is married to Oluyemisi Abimbola, a medical practitioner and blessed with three wonderful graces, two girls one boy.

He has worked and produced notable Nigeria artistes like King Sunny Ade on the project Nigeria ti gbogbo wa ni in 1994, which he composed and produced.  He wrote the introductory part of Wasiu Alabi Pasuma’s first album titled RECOGNITION. He produced and directed the first Gospel Musicians’ Association of Nigeria joint album in 1996 which featured the likes of Evang. Prof. Ebenezer Obey Fabiyi and Dr. Bola Are.