Music: Voke – We Are Human [@Voke_songz] 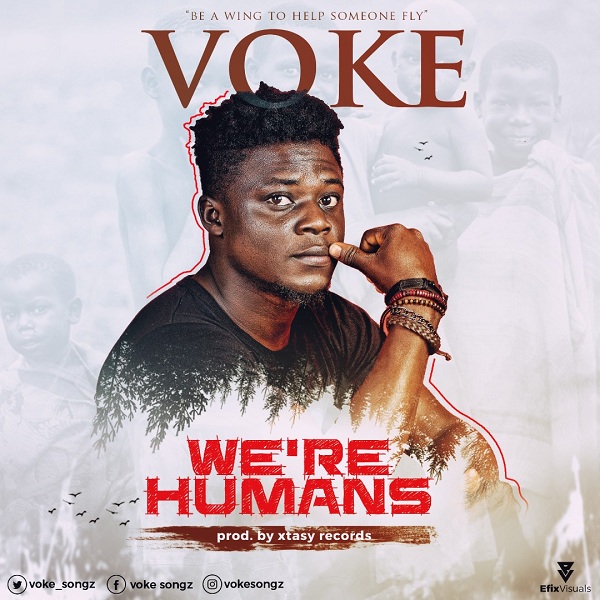 He shares message behind the song:

“We live in a time where diverse kinds of tragic events are happening. Many people are starving, some are homeless due to natural disasters, and most of these people have lost hope.

“We can’t change the happenings in the world but we can be a wing to help someone fly out of that situation when we show a little act of kindness. We are all connected as humans all around the world. We have a heart, and within that heart is a part that loves naturally. We are not robots. We’re Human.”

Efiokpene Voke was born in Ughelli Delta State on the 10th of June 1987 to Mr & Mrs Raymond Efiokpene. He’s the 4th child of 5 children. His academic journey started at Sure Success College in Warri where He got his First School Leaving Certificate then proceeded to Western Delta University, Oghara Delta state where he obtained a degree in Political Science and Public Administration.

Voke started his musical career at a very tender age ministering and leading worship in his local church, following his passion for Gospel music the young RnB singer formed and lead a musical group called “THE PSALMIST”, ministering great gospel songs throughout the entire city till it became a household name to reckon with. In 2014, Voke enrolled for the prestigious Destiny child gospel music talent hunt with the hope of becoming a better gospel singer, it was a journey filled with Grace, commitment and hard work as he worked his way through to the top. He finally emerged as the winner of the third edition of Destiny child gospel music talent hunt, walking away with a cash prize and the crown on his head. Destiny called and this young minister answered, indeed the world will hear!