Rend Collective Kids has released an official music video for the whole family titled “I Want A Hippopotamus For Christmas” can be watched below.

The newly formed Rend Co Kids is not “worship lite” but worship done right, with attention to craftsmanship, imagination, storytelling and artistry as their signature. “We’ve never labored over a record like we have over this kids’ album,” states Chris Llewellyn of Rend Collective and Rend Co Kids. “Kids are the most discerning audience out there—they feel the hollowness of the lackluster, uninspired content that so often is carelessly tossed their way. And they deserve something crafted, customized and carefully considered. So for over 18 months we literally did our very best.” DOWNOAD MP3: Rend Collective – As For Me (Lyrics Video) 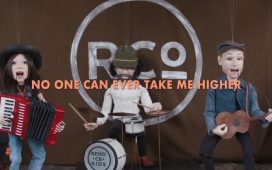