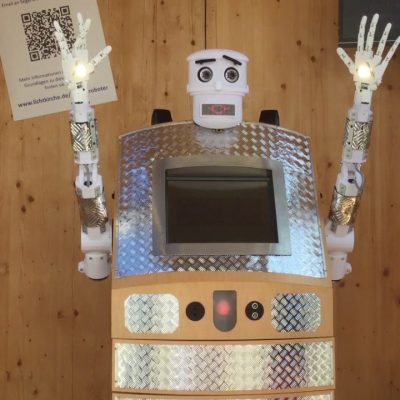 what is our Christianity turning into? As part of an exhibition to mark the 500th anniversary of the Reformation, a church in Wittenberg, Germany, has unveiled what it calls a “robot priest,” a machine that emits lights from its outstretched hands and dispenses blessings in five languages. The robot, called BlessU-2, will spout out whatever blessing a parishioner selects from a touch pad screen on its chest.

Aside from the creepy aesthetic of the robot, the very idea of programming a computer to bless people is itself a searing indictment of the collapse of Christianity in Europe.

Stephan Krebs of the Protestant church in Hesse and Nassau, which came up with the robot idea, told The Guardian, “We wanted people to consider if it is possible to be blessed by a machine, or if a human being is needed.”

Given the rapid disappearance of Christianity in Europe, that seems like an odd way to mark the quincentennial of the Reformation. More than odd: it seems like a deliberate attempt to talk about something other than what Christianity is and why Europeans, like all people, desperately need to hear the gospel of Jesus Christ for their eternal salvation.

Secularization Is Killing The Church

Meanwhile, Christianity is disappearing from the European continent. Two years ago, Damian Thompson noted in The Spectator that in the first decade of the twenty-first century, the number of Christians in Britain fell by 5.3 million, or about 10,000 a week.

At that rate of decline, he wrote, “the mission of St Augustine to the English, together with that of the Irish saints to the Scots, will come to an end in 2067.”

That is the year in which the Christians who have inherited the faith of their British ancestors will become statistically invisible. Parish churches everywhere will have been adapted for secular use, demolished or abandoned.

The Church of England is declining faster than other denominations; if it carries on shrinking at the rate suggested by the latest British Social Attitudes survey, Anglicanism will disappear from Britain in 2033. One day the last native-born Christian will die and that will be that.

The decline might be accelerating even beyond these dire projections. In January, the number of people attending weekly Church of England services dropped below one million for the first time ever, accounting for less than 2 percent of the population. Church attendance is now at half the level it was in the 1960s.

This is a familiar story in America, too, where mainline Protestant churches, whose chief concerns these days seem to be climate change and gay marriage, are going the way of the Church of England. If current trends continue, America’s mainline churches have only 23 Easters left before they’re empty.

Some Church Leaders Are Choosing Oblivion

A spate of books by Christian writers published last year grapple with the implications of a totally secular society hostile to Christianity. Some of them, like Anthony Esolen’s “Out of the Ashes” and Rod Dreher’s “Benedict Option,” argue that Christians should batten down the hatches and prepare for things to get very difficult for believers in Europe and North America.

Although these books are framed as ways for Christians to respond positively to the societal decay around them, the overarching message is dire: Christians need to stop telling themselves that electing Republicans to office or staging pro-life marches is going to save them from becoming outsiders or suffering persecution.

The truth is, Christians are already outsiders, and if they are going to preserve the western church for future generations they need to begin building communities for that purpose and separating themselves from the mainstream of society.

That’s sage advice, and it involves some hard choices. Among them is recognizing the extent to which church leaders and institutions have abandoned the faith in favor of secularism. “When your only choices are repentance or oblivion, you repent,” writes Esolen.

But that’s not entirely true. Sometimes people choose oblivion—and sometimes oblivion takes the form of a robot repeating a programmed blessing for anyone who might want one. But who would?

By John Daniel Davidson –  The Federalist