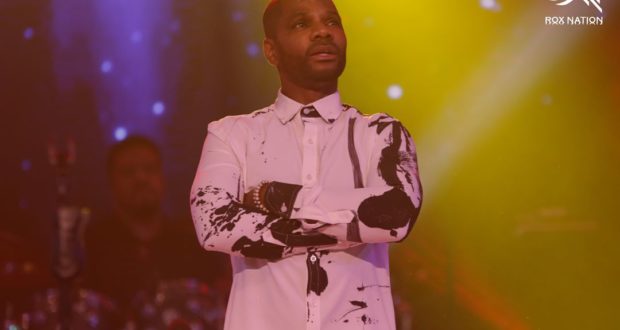 Contemporary Christian Music (CCM). The crowd is on their feet and chanting his name before he even takes the stage.

An electric guitarist unleashes a series of triumphant power chords as fans hold their smartphone cameras aloft, the glowing screens dotting the darkened concert hall like fireflies. Young women squeal as an athletic young man in form-fitting gray pants with pink stripes runs onto the stage and faces them with a huge smile.

“Don’ leave me up here by myself. Let me hear you scream!” he shouts as the audience roars in response.

It’s another sell-out crowd at Center Stage for Tauren Wells, one of the biggest stars in Christian contemporary music. The five-time Grammy nominee puts on a show that features plenty of impassioned singing, an assortment of moonwalks, “popping and locking” street-dance moves and mini-sermons about his faith.

Yet there is one subject that Wells’ supple vocal range won’t reach. He won’t sing about hot-button political issues, and he certainly won’t criticize President Trump. 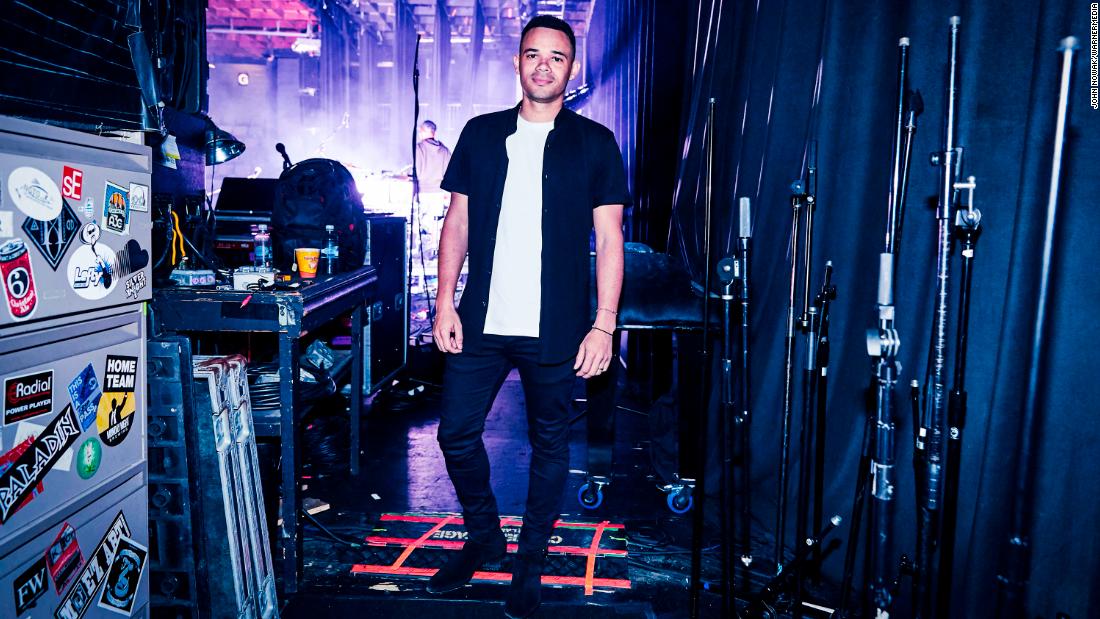 Tauren Wells, before a recent show at Center Stage in Atlanta, says he serves something higher than any political agenda.

Critics have skewered white evangelicals for their steadfast support of Trump, a man that author Ben Howe says has flouted Christian values and “lived most of his life actively, and unapologetically, in opposition to them.”

But there is one group of evangelical leaders who has largely escaped scrutiny: stars of contemporary Christian music, also known as CCM.

These CCM stars pack megachurches, amass big social media followings and command some of the biggest platforms in the evangelical world.

What’s most striking about these artists, though, is not what they sing. It’s what they leave out of their songs.

The America these artists love to evoke in their songs is stuck in what one columnist called a “hideous loop of hate.” White supremacists march in public chanting, “Jews will not replace us.” A man guns down Latino shoppers in an El Paso Wal-Mart. School shootings now seem almost as frequent as proms. The President demonizes immigrants and tweets racist insults.

Yet little of these ugly realities make their way into CCM, which is now dominated by upbeat praise and worship music.

There are occasional calls for racial tolerance in some songs like Mandisa’s “Bleed the Same.” But if someone is looking for righteous anger at how the “least of these” is treated in America, some critics say they won’t find it in Christian contemporary music. 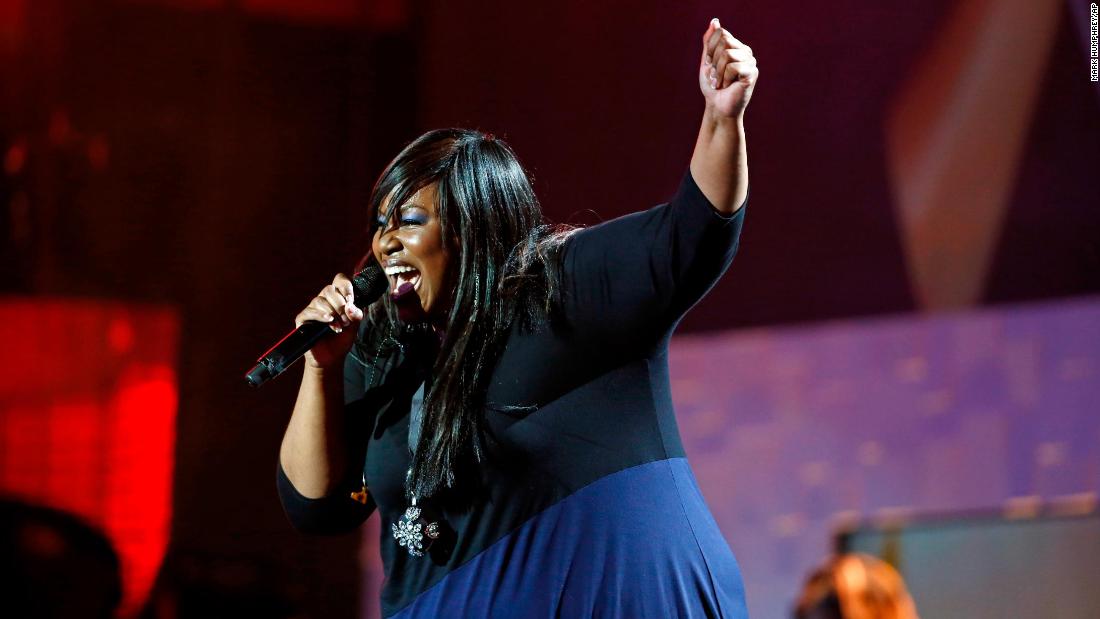 Gospel singer Mandisa took an unflinching stand against racism in her popular song, “Bleed the Same.”

Is it time for Christian musicians to start speaking out more on the widening political and racial divisions in the Trump era? Or should they keep performing songs that focus on love, not division?

For some, those questions present a false choice. They say CCM artists are already offering the best solution for political battles in the Trump era: the Prince of Peace, or what some call Jesus.

“There are ton of a people who think that the most relevant, extreme message you can give in times like this is to stop being hateful and love other people,” says Dan Keen, who teaches students about the music business at Belmont University in Nashville.

Keen believes that just because most CCM artists don’t hammer Trump or his immigration policies doesn’t mean they’re Christian copouts. Many of these artists are involved in charitable causes and other ministries that people ignore, says Keen, who has worked at a Christian music label and served on the GMA’s board of directors.

One example of the widespread altruism in the CCM field is Smith, now an elder statesmen. He has raised funds to battle AIDS in Africa.

“I don’t think they’re dodging anything,” Keen says. ” I see them trying to further the cause of Christ and being Christ-like in their behavior.”

Why many CCM artists avoid politics

So why do most CCM artists refrain from getting too political? Many cite the Bible.

Wells’ allusion to obeying authorities is often attributed to a passage in Romans 13 where the Apostle Paul declares Christians “must obey those who rule over you” because they have been placed there by God.

Wells, who is also a minister, is a biracial man who has talked about being racially profiled on social media. But he follows the 11th commandment of CCM: Stay away from politics.

“When you talk about politics, the air leaves the room,” says the singer, whose crossover appeal is so broad he has opened for Lionel Richie. “It just automatically goes negative when we forget that there is so much positive stuff happening as well. But we also forget that our hope as believers is not invested in an earthly kingdom, or a governmental system. It really doesn’t matter as much for me who’s in office because I don’t serve at the pleasure of the President. I serve at the pleasure of the King [Christ].”

There is another, less ethereal reason why CCM artists stay away from politics — loss of income.

White evangelicals are Trump’s most steadfast supporters. They are also some of the biggest fans of CCM, and they wield economic clout. 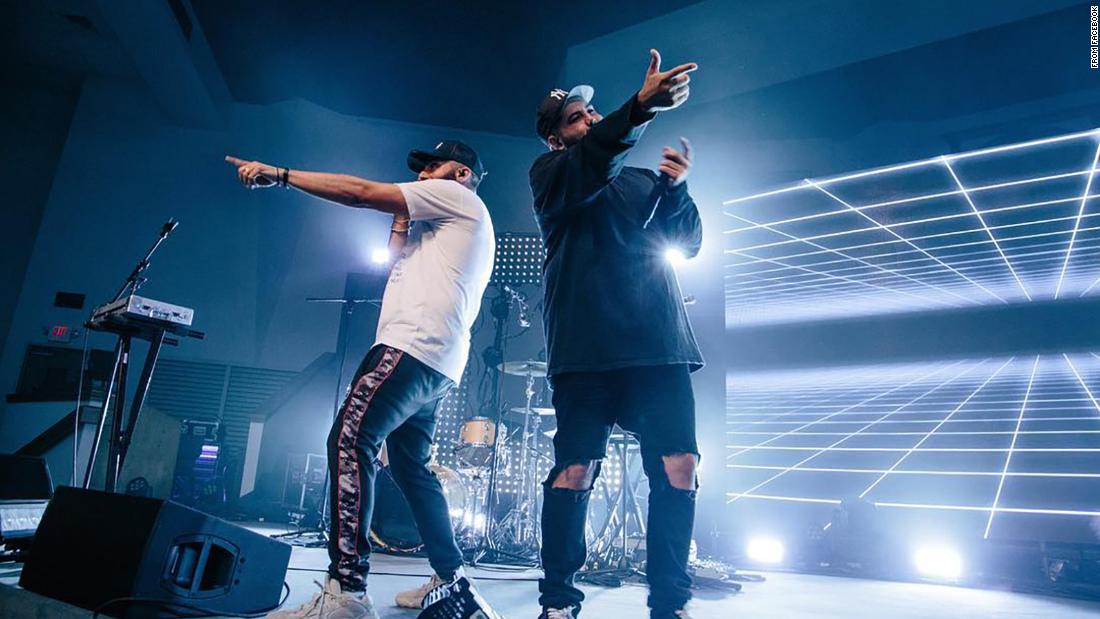 Steady work for any musician is precarious, especially in a niche genre like Christian or gospel music. If a Christian musician wants to get a steady paycheck there’s usually only one type of megachurch that has the resources to hire them as a full-time worship leader, Keen says.

“It’s going to be fundamentalist, Bible-believing churches,” he says.

Then there’s another factor that encourages CCM artists to toe the theological line. In the CCM world, fans call out artists who stray from traditional beliefs.

Dan Haseltine, lead singer for the group Jars of Clay, was mauled on Twitter after he questioned why gays shouldn’t marry in a series of posts. He later apologized for his comments, calling them a poor choice of words.

Social Club Misfits, a Christian hip-hop duo that pushes the boundaries of CCM, also was attacked on social media after they released songs that called for compassion for gays and lesbians, says member Fernando Miranda, who performs under the name Fern.

“People thought we were being anti-Christian,” he says. “I remember the forums on Facebook — it was so bad. I don’t even look on Facebook anymore.”

And if that isn’t discouragement enough, CCM artists can look at the example of another group that got too political for their audience — the Dixie Chicks.

The group alienated many of their fans and was blacklisted by country music radio after criticizing President Bush in 2003 for the invasion of Iraq.

“Their main audience was country, and country shut them down,” Keen says. “People called it censorship at the time. It wasn’t censorship. It was the audience saying we don’t want to hear from you if that’s what you think about our President.”

Preaching about the poor and the hungry

Those who say CCM artists should speak out more also cite scripture.

The Bible is filled with examples of prophets who spoke truth to those in power. John the Baptist lost his head because he confronted an unjust ruler. The scripture from Romans that Wells alluded to — that Christians must obey rulers — is also controversial because white Christians taught it to slaves to discourage them from rebelling.

And some of the 20th Century’s most revered Christian leaders — The Rev. Martin Luther King Jr., Dietrich Bonhoeffer — lost their lives because they refused to obey earthly authorities.

The Rev. Jim Wallis, an activist evangelical pastor, says Christian artists “shouldn’t be politicians, but they shouldn’t just be entertainers.”

He cites Matthew 25: 31-46, the famous parable in which Jesus said people would be judged by how they treated the poor, the hungry and the stranger. 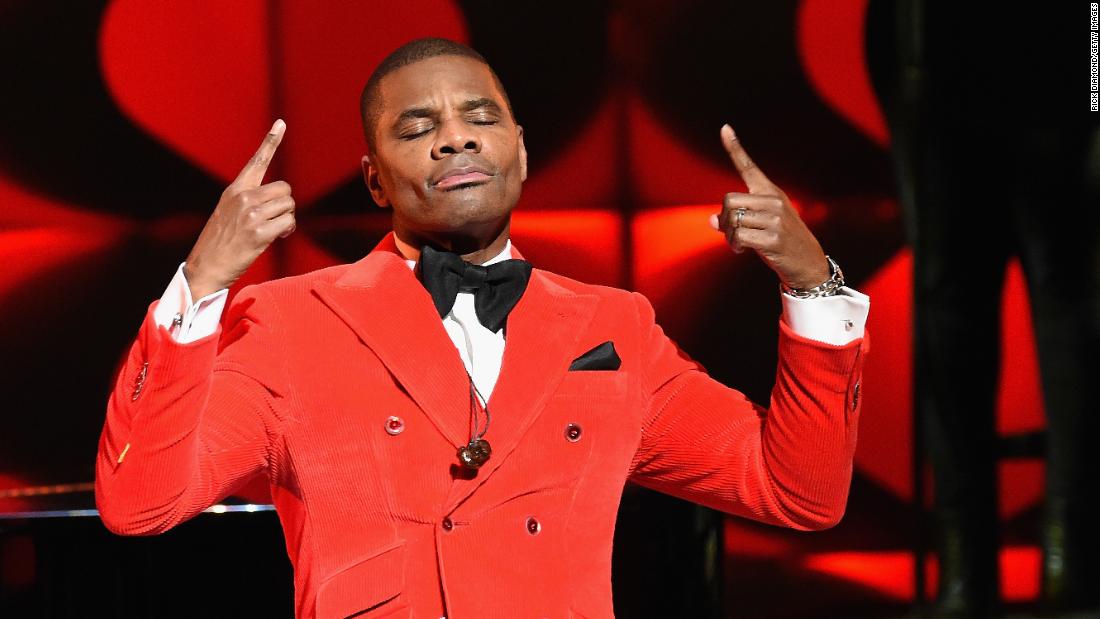 Gospel star Kirk Franklin is a rarity in Christian music because he has spoken out against President Trump.

Those issues are inseparable from politics, Wallis says.

“That would be like Jesus saying I was going to talk to you today about the poor, the hungry and the stranger, but I’m not going to because that could seem political,” he says.

Wallis believes there is also another pragmatic reason for CCM artists to speak out more in the age of Trump.

In his new book, “Christ in Crisis: Why We Need to Reclaim Jesus,” he says younger evangelicals and Christians of color are deserting evangelical churches “in confusion and disgust” over leaders’ hypocrisy and inattention to issues of social justice.

And they are not alone. For the first time, Americans who say they identify with “no religion” now outnumber evangelicals and Catholics, according to one widely cited survey.

Some of the biggest critics of evangelicals and CCM, though, are CCM artists themselves.

Christian hip-hop artist Lecrae once responded to fans who told him to stick to the gospel and stop singing divisive songs about racism by saying, “true faith stands up for the oppressed and the broken.” Gospel star Kirk Franklin also has criticized evangelicals in the past for their support of Trump.

But CCM stars don’t have to tell listeners to become Democrats, Wallis says. Instead, he says, they should pin their message to the example of Jesus’ life.

Some CCM artists cite another example as proof that a Christian band can take on hot-button political issues and thrive: U2.

It may surprise casual listeners, but some of the most stirring and thought-provoking Christian contemporary music doesn’t come from the CCM genre. It comes from four men from Dublin, Ireland. 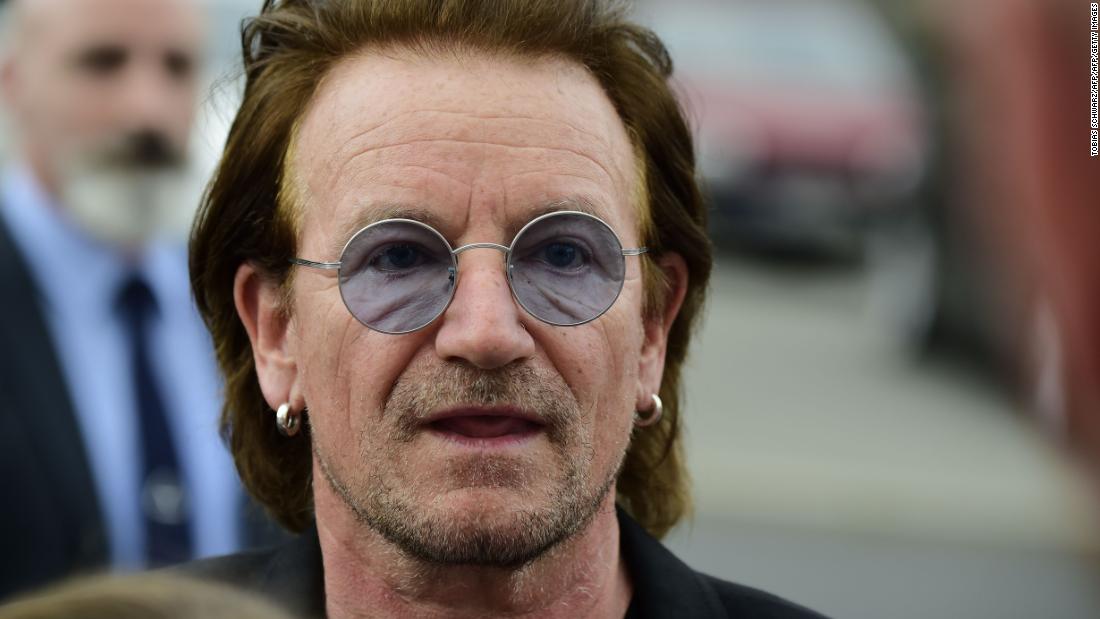 Bono, their frontman, sings about the cross and resurrection on the group’s “October” album. Subsequent songs like “40, “I Still Haven’t Found What I’m Looking For” and “With a Shout (Jerusalem)” could be sung in virtually any Sunday morning worship.

But Bono isn’t a CCM fan. He has called the music risk-averse and predictable and said he prefers another collection of inspirational music: the psalms in the Bible. He says they’re filled with laughter, tears, rage and doubt.

Social Club Misfits, the hip-hop duo, tackle some of those topics in their music. In song lyrics and on stage they have taken on such edgy subjects as racism, pornography and drug abuse.

In one song they declare, ” I have gay friends and I’m not afraid to say it… And I love ’em like Christ did.”

Member Martin Lorenzo Santiago, whose stage name is Marty Mar, says there’s so much racism and hatred in the world that they feel compelled to say something. 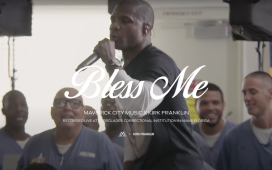